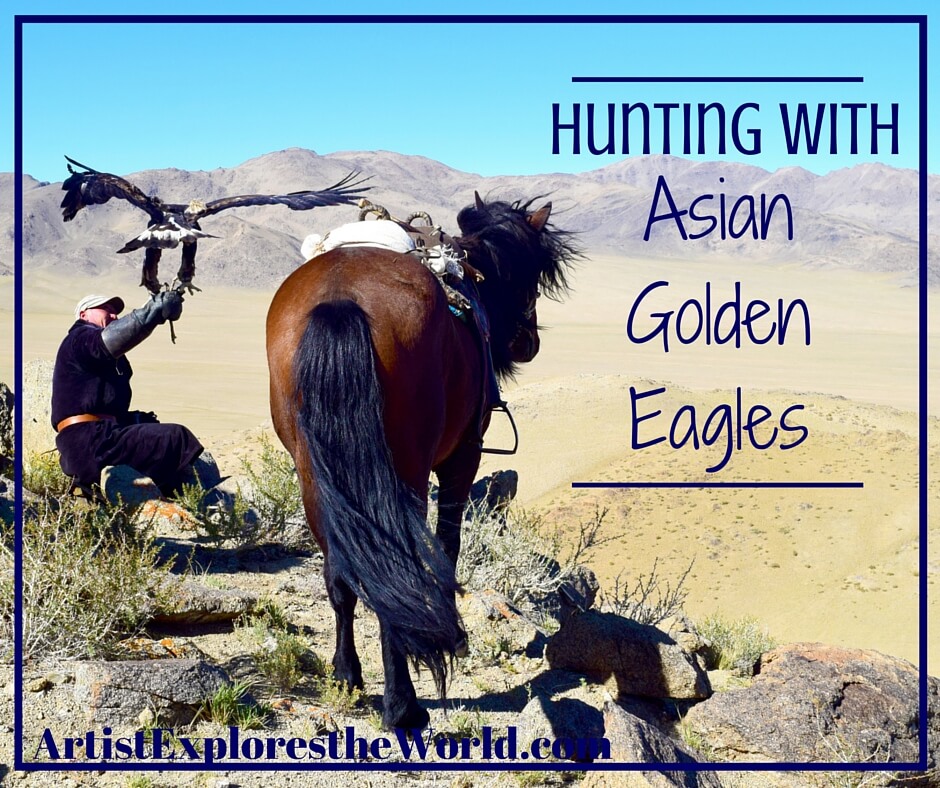 Obligatory Disclaimer: While I will be talking about Eagle Hunting this is not meant to be a perfect class in Eagle Hunting. I learned the basics to the best of my ability but am by NO means a trained eagle huntress. You’ve been warned.

It’s so BIG! This was my first reaction to seeing an Asian Golden Eagle for the first time. She was perched on Botei’s arm as we rode out among the plains of Altai mountains. I was glad I had bundled up because even the warmth of excitement wasn’t enough against the Mongolian weather. The wind ripped across the open land tearing at us as we rode but luckily the rising morning sun, along with about 6 layers of clothing, kept me from freezing. I rode alongside Botei and his son, each had their eagles perched on their arms as they rode. We were all headed for the mountains in the distance to watch first-hand how amazing these birds of prey are at hunting. 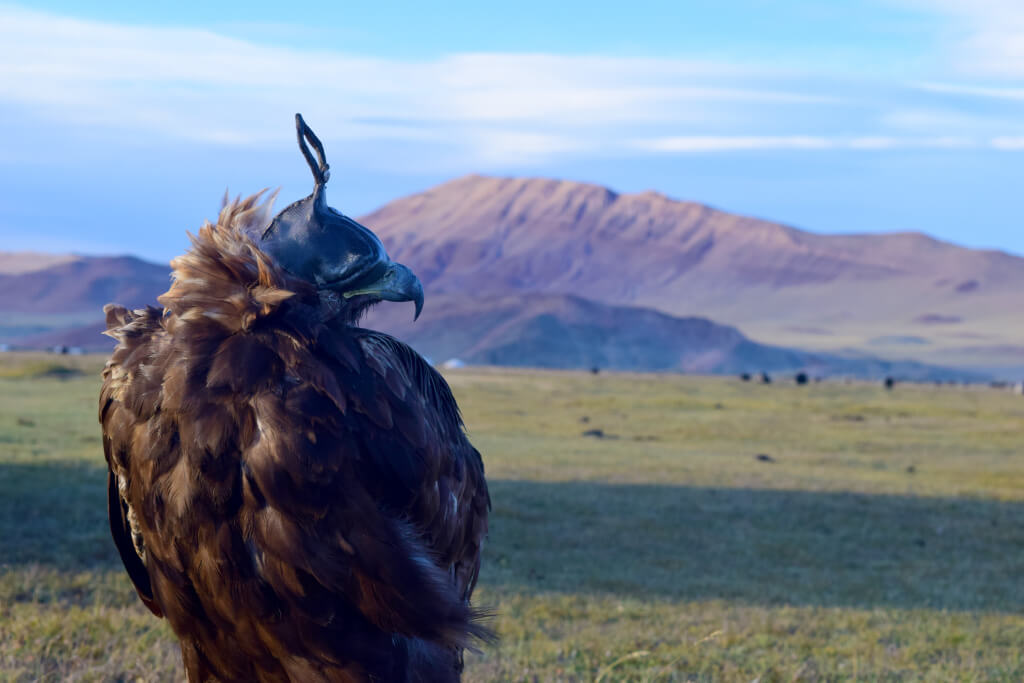 The traditions of the Kazahk Eagle Hunters come from their traditions originally practiced in Kazahkastan. During the communist period in Kazahkastan many Kazahk’s fled to Mongolia and remained there. The area of Ulgii is populated mostly by Kazahk’s who now call this part of Mongolia home. The entire process of Eagle Hunting in Mongolia has unique and interesting historical and cultural significance for the people. They are proud of their heritage and culture, and most are willing and friendly as they share it with foreigners. 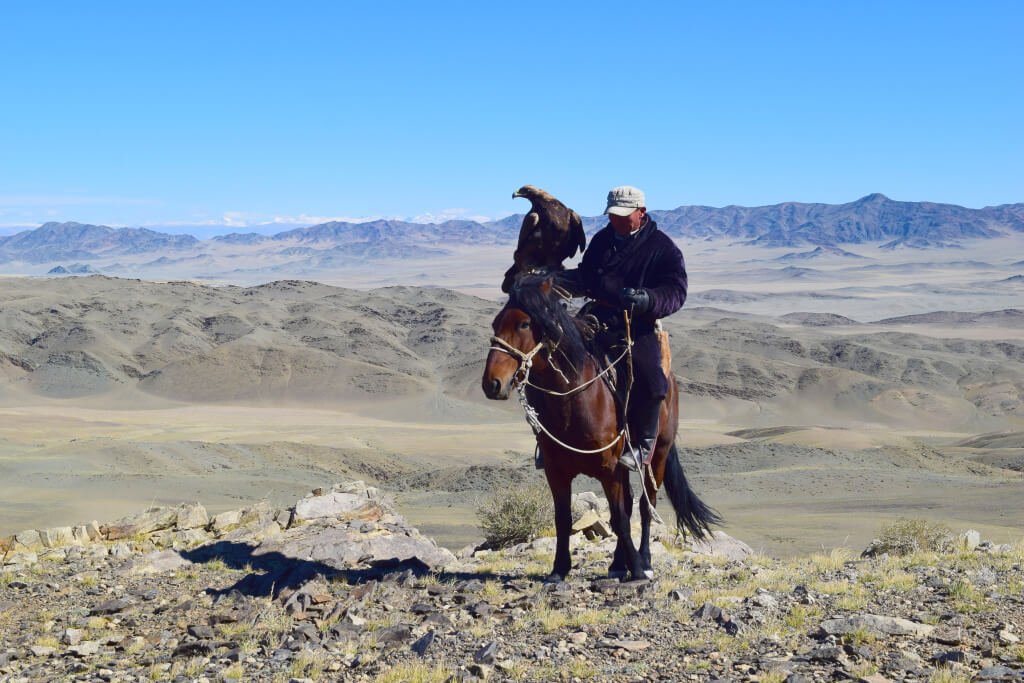 Nurbie, our translator and guide, explained the process of a hunt. At least two hunters must go out to hunt. Traditionally the hunters would arrange to meet on a specific day, usually after a good snow storm, to hunt together. Two people are required because of the way the hunters must hunt with their eagles. During hunting season the eagles are fed less food then they normally would eat in the wild. This means they are hungry for the hunt and also they are not up to full strength so they can’t fly away from their owners- although we’ve been told some people have lost their eagles before. Because they are not at full strength, they do not have the power to fly as high or controlled as they would in the wild, so the hunter must first position himself and his bird at a high vantage point that allows the bird to comfortably glide down the mountain and onto its intended prey. The second person goes down the mountain making noise around the area in hopes of scaring an animal into running away across the plain, and making it an easy target for the eagle to catch. Once an animal does run, the first hunter perched on the mountain un-hoods the eagle and lets it go for the kill.

I gripped the front of my saddle. It had been a while since I had rode last and I was not accustomed to climbing mountains. The sturdy Mongolian horses charged forward un-faced by steep hills of rock and gravel. I was much more reserved. I was amazed by my first real look at the wild Mongolian planes. The vast and stunning almost completely untouched nature took my breath away. Only the occasional ger and sprinkle of herds call this land home for hundreds of miles.

Within the first half hour of our hunting expedition we were lucky enough to be the only group that both the hunter and guide have ever led that has ever seen a successful hunt of a fox. It was amazing to watch, and I didn’t even see the full action it happened so fast. The eagles are incredible creatures with the power to hunt very large prey. They swoop down quick and fierce for the kill and wrap their talons into their prey to squeeze the life out of it. As the eagle swooped down Botei barreled down the mountainside on horse-back. I, on the other hand, slowly directed my horse down the mountainside squeezing my legs and mentally screaming in nervousness as we half walked, half slid down the side of the mountain. I marveled at the skill of the riders, whom clearly had been riding since they were children over this tricky terrain. 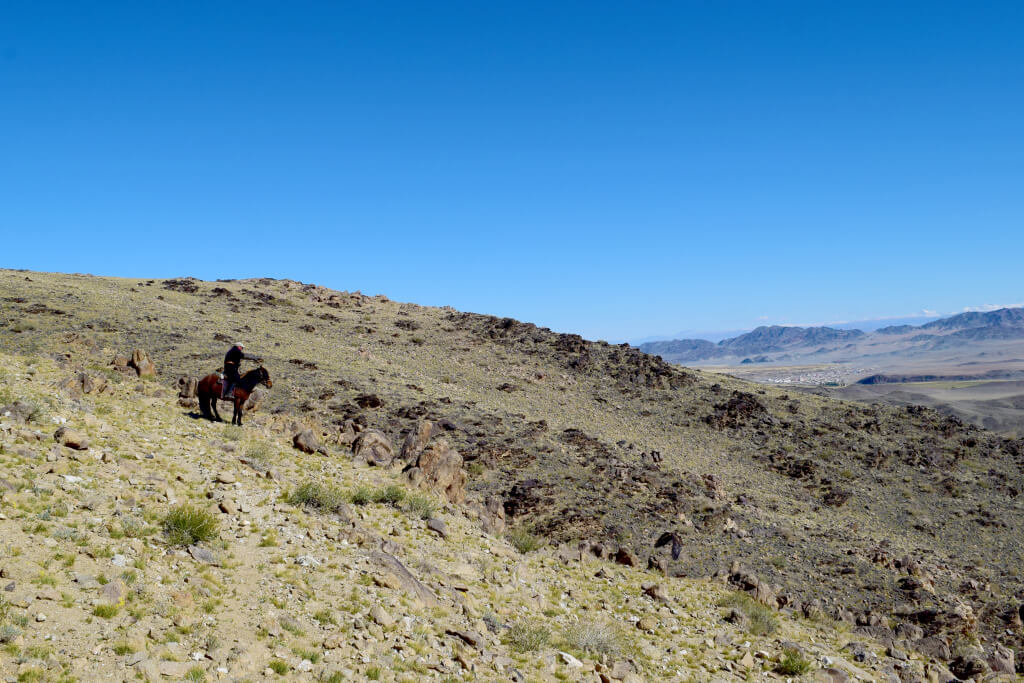 The eagle being released to catch the fox. Can you spot it?

At the bottom we were greeted with hoots and whistles of cheer and success. The eagle was allowed to feast on the fox as a reward but the pelt was given away as a trophy to our driver. The eagle, now re-hooded, was calm and quiet. We continued to hunt for a little longer, to allow the second eagle to get in some training but the rest of the hunt was uneventful. We all took a break perched on the mountainside for a photoshoot of the hunters and their eagles. 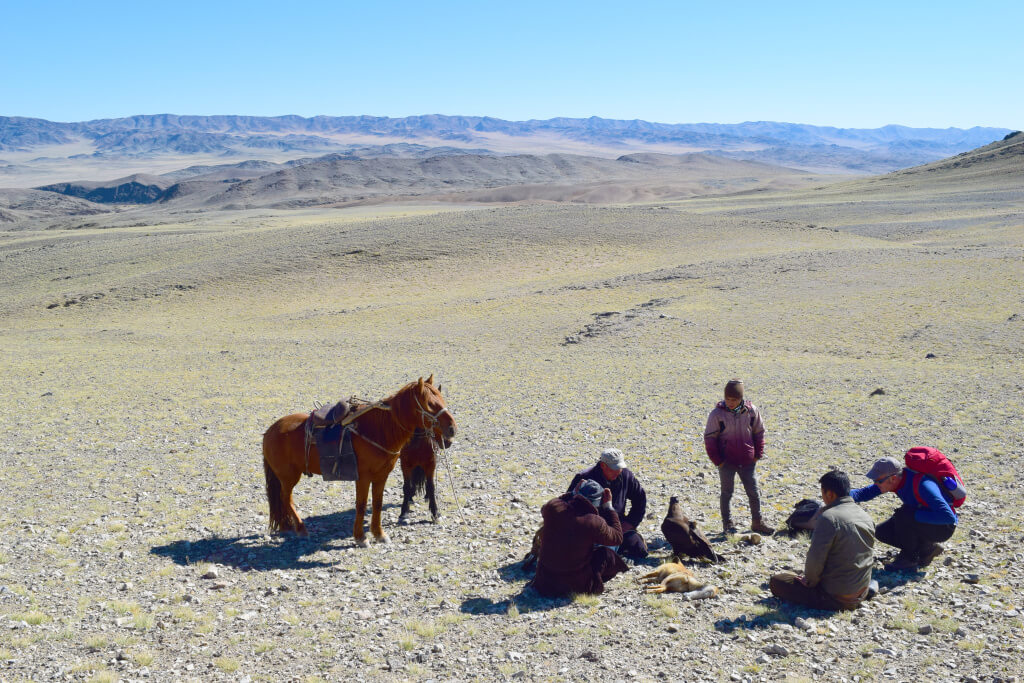 As lunch rolled around our meals of pasta and mutton were laid before us. It was a feast prepared by Kadu our talented chief who prepared all of our meals during or eagle hunter stay.  I was starved so I released my hungry pony to graze and settled down with everyone to eat.

Over lunch Nerbie translated as we chatted with Botei about his family, questions about his eagle and the training of the eagles. Each eagle is taken from the nest as a hatchling or taken when they are about a year old. They do not take eagles that are older because they do not want to disturb an established family, plus younger eagles are easier to train. They are taught to perch on the arm of the riders and to hunt through a reward system. The eagles get fed well when they catch something. They train the eagles to hunt prey by attaching a fur pelt onto a string and dragging the animal skin around for the eagle to attack, when they do they get a food reward. The eagles learn to associate food with this process of the catch. They are also taught to respond to the call of their owners. A golden eagle’s hearing can easily pick out the distinct call of their owner and they learn that following this call will lead to food. 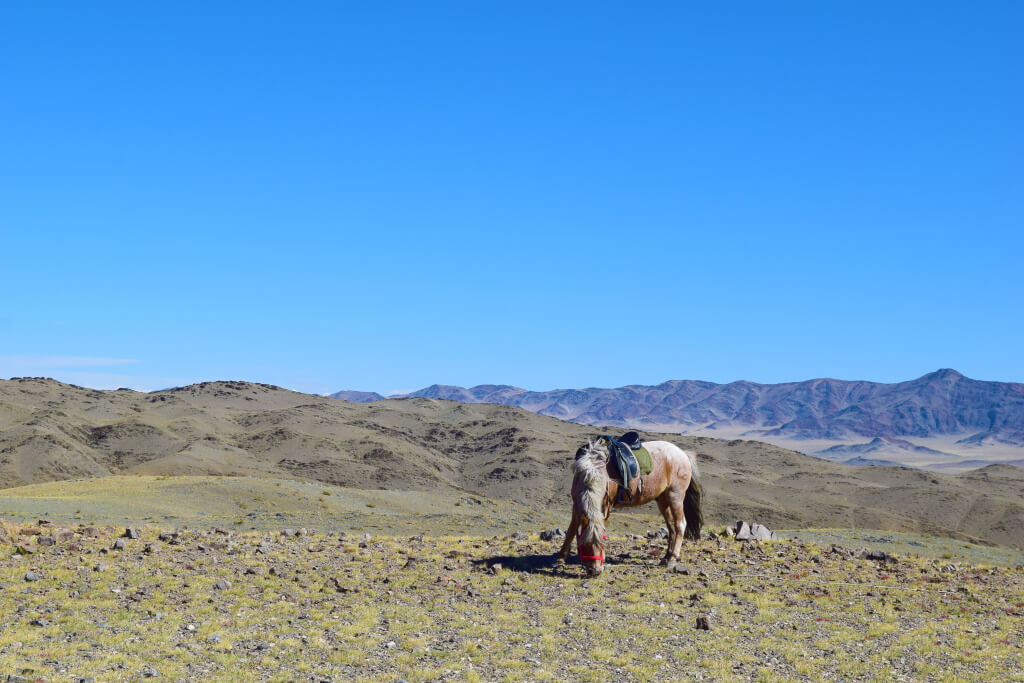 Birds are kept with the family for an extended number of years depending on their skill and obedience. None of the eagles are kept for life. Since Golden Eagles breed for life most hunters release their eagles when they come of a mature breeding age (around 7 years old) so that they can find a mate and continue the species. Asian golden eagles can live up to 20 years or more so they are given the chance to live a full life beyond their time spent hunting.

We finished our lunches, prepped for our second hike of the day, and then said goodbye to Botei,  his son and their eagles. As they rode off towards home I was reminded of how lucky I was to be experiencing a culture that is so unique and different then my own. I played the moments of the eagle’s catch over in my head and my excitement for the coming Golden Eagle Festival started to build.

A moment to remember.

Live, Love and Travel on. 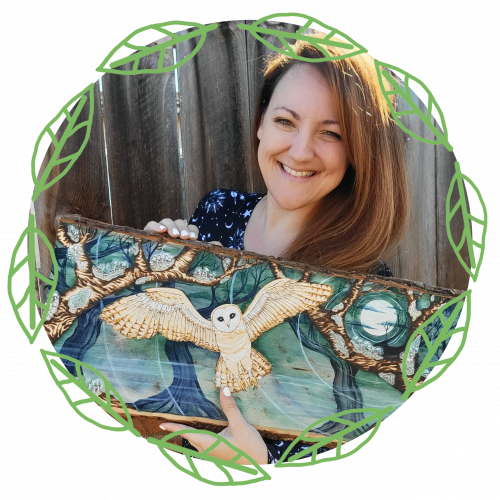